Be Present in the Moment

Having spent the last decade working as a hospice nurse in various settings, a lot of issues and topics in healthcare have waivered and changed, but one thing remains the same. Almost anytime I tell a stranger that I work in hospice, I am inevitably found to be on the receiving end of a look filled with extreme concern. Their eyebrows lift, their eyes become wide, and their mouth drops open into a small circle; they almost pitifully express some variation of “ohhhhh, I don’t know how you do it,” or “that must be terrible.” While it’s true that my job can be filled with difficult and sad situations, the amount of rewards and perspectives gained and are truly unique and endless.

I think every hospice nurse has at least one handful of patients who will forever be etched in their minds and hearts for various reasons. They become the reasons and driving forces to continue doing what we do. They are the people who inspire us to become better nurses and better human beings as a whole. Dying patients teach us so much about life and that is such a gift.

Several years ago, I took care of a patient named Sam (names and several identifying details changed to maintain privacy). As someone who has worked with a lot of patients and families over the years, I have come to realize that for me, there are just certain people who I immediately feel connected to upon meeting them. Sam was one of those people and I will never forget him despite only knowing him for four days out of his forty year lifespan.

Five years prior to his life limiting cancer diagnosis, Sam had gotten married to his college sweetheart Kate. Four years after that, they gave birth to a daughter. Sam had been a college athlete and spent much of his post college career coaching various team sports. He had run numerous marathons and had been an avid biker. He lived a much healthier lifestyle than most. And yet he had terminal cancer. Despite aggressive treatment, Sam’s cancer and tumors spread to his spine, rendering him paralyzed and bedridden by the time he signed onto hospice. He was tall and muscular despite probably having lost much of his body mass over the last year of treatment. Sam had every right to be angry and miserable, but he instead he seemed to choose happiness, positivity, humor, and calmness with his remaining time. 0.

One evening, my CNA Michelle and I entered Sam’s room to do a routine comfort check together. Sam’s wife Kate was in the room along with Sam’s parents and in-laws. The energy felt tense and there were several conversations unfolding and overlapping. It was apparent that Kate had a very driven personality; it was obvious she had been accustomed to researching and advocating for and managing Sam’s treatments and appointments throughout the very chaotic course of Sam’s disease. Everyone in the room was abuzz with logistics and planning and coordination; I am not even sure what about. It was absolutely out of a loving place, but as a nurse, it was very intimidating to walk into this very businesslike, staccato atmosphere.

But Sam was calm. Sam was quiet and introspectively looking on as his frantic, but loving family tried to grasp onto any small strands of control they could. Michelle and I approached Sam’s bedside and offered to reposition him as we had done every two hours prior. He eagerly accepted and then asked if we would help him to stretch. Sam could move his arms, but was unable to move or control his lower body or sit upright and was completely dependent on others to move him. As was the case most days, Michelle and I were in the midst of a busy shift with outstanding documentation and tasks looming. But we stayed. And without any indication how busy we were or where else we needed to be, we stood at the foot of Sam’s bed and passively stretched and moved his legs.

Sam looked so happy and relaxed as we continued to sway his legs up and away from his hospital bed; his family continued to talk amongst themselves. Almost organically, Michelle and I began moving Sam’s legs in a pedaling motion; a huge smile spread across Sam’s face and he said, “I haven’t been able to ride my bike in so long. This is great.” We continued pedaling his legs. He closed his eyes as if he were envisioning riding through the countryside on a warm, sunny day. He raised one eye open and peered over at his family and simply said, “none of that matters right now, but it’s all going to be ok you know.” The room grew silent as everyone turned their attention to Sam. Sam closed his eyes once again and continued pedaling on for another ten minutes. Michelle and I repositioned Sam and covered him with soft blankets. Kate placed his young daughter into his arms. The room was peaceful and changed as we left. Sam had reminded us all to stop and notice the beauty in life and to be present in the moment. 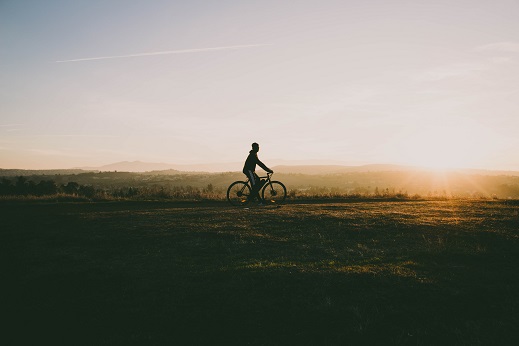 Sam closed his eyes as if he were envisioning riding through the countryside on a warm, sunny day.

Photo by Jay Kudva on Unsplash

I didn’t really think much more of the encounter at the time and probably would have forgotten all about it had he not died less than 6 hours later. When I left my shift, he was resting comfortably and doing fine. I arrived to work the next afternoon to learn that Sam had passed away unexpectedly around midnight. He was, of course, terminally ill and was slowly declining, but there was really no indication that he would have been gone that quickly. I was shocked. I was sad. But I was unbelievably grateful that Michelle and I been able to provide Sam such a simple, yet meaningful afternoon bike ride on his last day on earth.

As hospice nurses, we frequently find ourselves listening to our gut feelings and we force ourselves to stop and slow down. Our focus is very patient centered. Our tasks and documentation are important, but they are not the priority and we often put them on the back burner to ensure patient needs are met. This is such a unique healthcare setting. We make the time to treat people like human beings rather than patients and that is why I love being a hospice nurse so much. Thinking about patients like Sam (and many more before and after him) helps me to remember that life is precious and often way too short; he serves as an ongoing gentle reminder to not let the stress and logistics of life get in the way of noticing all the beauty right in front of me.

This blog post was shared by Keri S., a Registered Nurse at Unity Hospice.

If you found this information helpful, please share it with your network and community.

About the Author: Unity Hospice