Unity Hospice was the only site I applied to in order to complete my counseling practicum and internships. Something within told me that this was the place I needed to be. I was drawn to the possibility of being able to hold space for grief, to serve those who are enduring one of the most grueling experiences and be with them as they are. Thankfully, my application was accepted, and I quickly felt myself a part of the Grief Services team.

Early on in my experience, Winter 2020, two resources were provided that helped me understand what dispositions grief counseling calls for. They are Dr. Alan Wolfelt’s Tenets of Companioning the Bereaved and Megan Devine’s video, “How do you help a grieving friend?” I have returned to these multiple times and I highly recommend them to anyone who feels lost, helpless, or uncomfortable in supporting someone who is grieving. They provided and continue to provide me with a framework for how to enter and hold space for grief. Initially, I assumed this space would be physical. Rooms in which groups and individual sessions would occur. With the advent of covid-19 however, this space became almost entirely virtual.

The need for grief support within our community has remained heightened throughout the covid-19 pandemic. When I returned for my fall semester in September, Unity was looking to expand its virtual group offerings that begun in August. I took on the responsibility of completing Zoom intakes and served as a co-facilitator for a number of groups.

Transitioning to virtual groups brought its challenges. For myself, it was learning how to use the various features of Zoom as a ‘host’ and adapting the group facilitation skills I have learned to the virtual space. For bereaved, questions on how to navigate Zoom were also common, and for many group members it was their first time using the platform. Additionally, group members often had not previously participated in a support group, making the newness, challenge, and vulnerability of the experience twofold.

Benefits also emerged, however. Some group members shared how since they live further away from Unity’s De Pere office, they otherwise would not have been able to join a group. Others said that being in their own space helped them to feel more comfortable in participating. 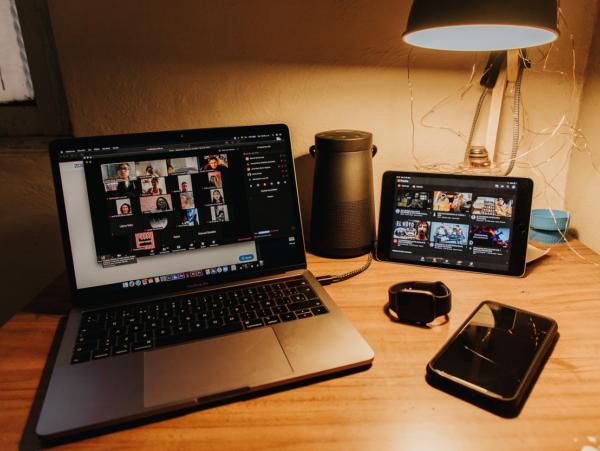 Photo by Gabriel Benois on Unsplash

The Power of Group

Throughout the transition to virtual support, the power that can come from connecting and supporting one another in grief remained unchanged. Once a group formed and technical hiccups were sorted, I observed the connections, camaraderie, and relationships that developed, just as they would in an in-person group. Although the space was virtual, group members came as they were with their grief, sharing, listening, and holding space for one another.

It has been my experience that the framework I encountered early on through Dr. Alan Wolfelt and Megan Devine very much applies to the virtual space. Connecting and being in relationship with others is an important part of navigating the grief process. I have been privileged to encounter and serve several people through Unity’s virtual grief groups, and I am heartened to know that the formation of genuine connections and healing relationships occurred in the virtual space.

This blog post was shared by Stephen U., a UW-Oshkosh student intern ’20-‘21 at Unity Hospice.

If you found this information helpful, please share it with your network and community.

About the Author: Unity Hospice